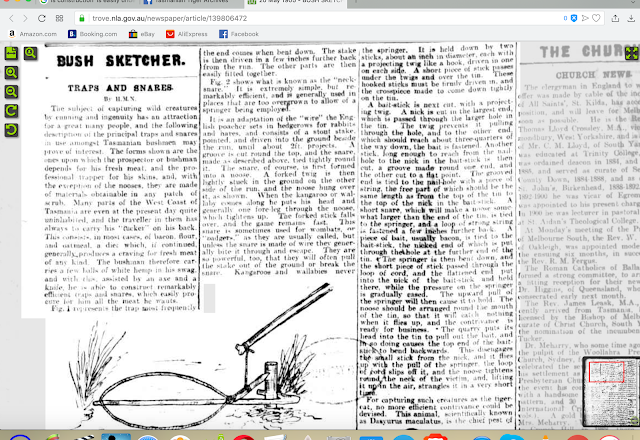 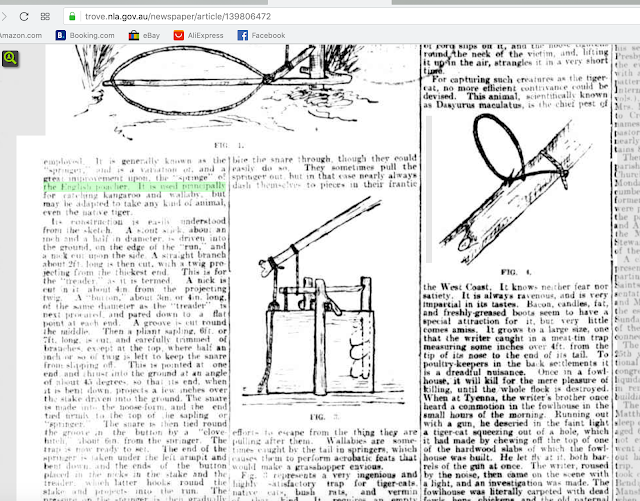 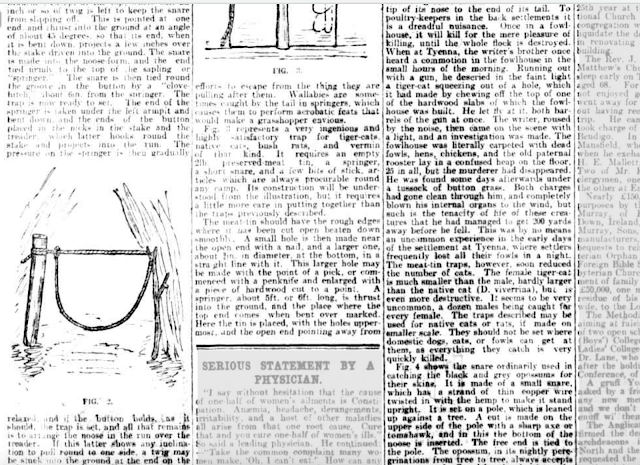 Help
FIG. (.
the West Coast. It knows neither fear nor
satiety. It is always ravenous, and is very
impartial in its tastes. Bacon, candles, fat,
ana freshly-greased boots seem to have a
special attraction for it, but very little
comes amiss. It grows to a large size, one
that the writer caught in a meat-tin trap
measuring some inches over 4ft. from the
tip of its nose to the end of its tail. To
poultry-keepers in the back settlements it
is a dreadful nuisance. Once in a fowl
houjsfc,'it will kill for. the mere pleasure of
killing, until the/Whole flock is destroyed.
When at Tyenna, the writer'6 brother once
heard a commotion in the fowl house in the
small honrs of the morning. Bunning out
with a gun, he descried in the faint light
a tiger-eat squeezing out of a hole, which
it had made by chewing off the top of one
of the hardwood slabs of which the fowl
house Was built. He let flv at it, both bar
rels of the gtin at once. The writer, roused
by the noise, ihen came on the scene with
a light, and an investigation was made. The
fowihouse was literally carpeted with dead
fowls, hensychickems, and the old paternal
rooster lay in a confused heap on the floor,
25 in all, out the murderer had disappeared.
He was found some days afterwards under
a tussock of button ~ grass. Both charges
had gone dean through him, and completely
blown his internal organs to the wind, but
8uc-h is the tenacity of life of these crea
tures that he had managed to get 200 yards
away before he fell. This was by no means
an uncommon experience in the early days
of the settlement at Tyenna, where settlers
frequently lost all their fowls in a night.
The meat-tin traps, however, soon reduced
the number oE cats. The female tiger-cat
is much smaller than the male, hardly larger
than the pfttivecat (D. viverrina), but is
even* store destructive. It seems to be very
uncommon, & dozen males being caught fhr
evert- female, Thetraps described may be
used for native cate or rats, if made on
smaller scale. They should not be set where
domestic dogs, oats, or fowls can get at
then
Email ThisBlogThis!Share to TwitterShare to FacebookShare to Pinterest
Newer Post Older Post Home