AT BEAUMARIS. AMONG THE TIGERS AND DEVILS

AT BEAUMARIS.
AMONG THE TIGERS AND DEVILS

(By Our Special Reporter.)
Anyone fond of strange animals and birds can spend a delightful afternoon
at Beaumaris, the well-known residence of Mrs Roberts, Montpelier-
road, whose beautiful collection has been thrown open to the public on so
many occasions for charitable purposes Mrs. Rberts is always looking out for novelties, and she has just
been fortunate enough to secure a fine specimen of a Tasmanian tiger and a whole litter of Tasmanian devils, all
of which are great rarities, and very seldom seen outside their native haunts. Responding to a kind invita-
tion on the part of Mrs. Roberts, a representative of "The Daily Post"called ro und on Saturday afternoon,
and was shown the new treasures.The Tas manian tiger, which is about the size of a  wolf, was lying down in
its cage, and looked a very graceful object, with its pretty black stripes on its brown woolly fur, its head like
that of an intelligent dog, short point-ed ears , slender tail, and gazelle-like eyes. Its scientific name is Thylacinus
cynocephalus, the dog-headed pouch-bearer or marsupial, but its popular names—such as tiger, hyena,
zebra opossum, and zebra wolf—are all derived from its stripes.
The marsupials, like the mammalia of which they are a group, are divided into meat-eaters and vegetarians. The
Tasmanian tiger belongs to the former, and is the largest carnivorous marsupial known. At one time it was
very common in different parts of Tasmania, but it is now getting very scarce, although it may still be seen
on the button grass plains of the West and North-West Coasts to fairly large numbers. Its nearest existing relation
is the North American opossum, but fossil remains of it have been found in Australia, showing that it
once existed there many centuries ago. One great peculiarity about it is that it does not possess the marsupial
bones that are found in nearly all other marsupials, these being reduced in its case to small cartilages. For that,
as for other reasons, it is of extreme interest to scientists, and has been ever since its existence was first made
known in the early part of last century. There are many points of resemblance between the dentition of the
Tasmanian tiger and that of the opossums, to which the Tasmanian devils also belong, the incisors of both jaws
being arranged so as to form a segment of a circle, the outermost beingthe largest and the innermost the
smallest, and closely resembling those of the dog. The tiger is said to dwell among the rivers and rocks In the
deep and almost impenetrable glens in the neighborhood of the most mountainous parts of Tasmania, where it
preys on the bush kangaroo and other small animals which there abound.According to Lieutenant Gunn, who
contributed some interesting notes to the "Naturalists' Library" more than 50 years ago, the tiger often attacks
sheep in the night, but during the daytime, when its vision is imperfect, its pace is slow. Before going away, I
gave the dog-beaded marsupial one more glance, but he heeded me not,and still reclined lazily at the bottom
of his cage, his gazelle-Iike eyes staring dreamily into space, as if conjuring up the sylvan scenes of his former
haunts.
https://trove.nla.gov.au/newspaper/article/180202498?fbclid=IwAR3ylyVJswtv_bqzNTO8DvNjhW3YYVfQ7EX3Ig2xnYSEySQxgkmjAPC5dno 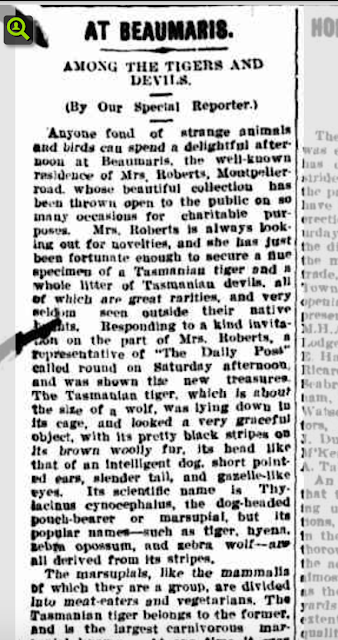