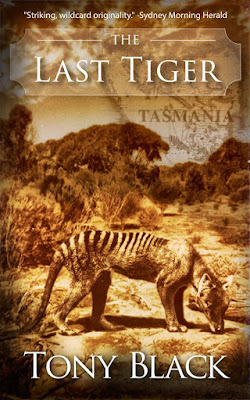 Author/member/thylacine fan.. Tony Black was kind enough to answer a few questions about his book "The Last Tiger" which is getting rave reviews on Amazon UK..see end of post.

Q-I was looking at your impressive list of crime novellas, short stories and books etc, what is the final count?

Tony Black-I think I'm up to 14 novels now, but I haven't counted up all the smaller stuff. The latest one is called Bay of Martyrs and is set in SW Victoria. I co-authored this with an Aussie writer called Matt Neal and it just came out here in the UK a week ago.

Q-What led you to writing as a career?

Tony-A complete lack of any other skills, to be brutally honest. I think I realised fairly early on that I wasn't going to get called up by Liverpool to pull on the red jersey, so writing jumped up the scale of my ambitions.

Q-How did you get interested initially into writing a book about thylacines?
Tony-I used to work on a paper in SW Victoria called The Standard and when I was there I wrote several stories about strange animal sightings in the district that the locals thought were the thylacine. I started to dig into the subject and was immediately hooked. It's a tragic story, something that should never have happened, and it struck a chord with me, on a very deep level, that is still resonating today.

Q-What research did that entail?

Tony-Initially, I went to the library in Warrnambool where I was staying and started to work my way through a shelf of books. In time I ended up talking to a lot of researchers and corresponded a little with Col Bailey, who I regard as one of the leading experts on the subject anywhere in the world. I was extremely flattered that Col rated The Last Tiger so highly because if anyone is qualified to pick apart my research it's him.

Q-Have you been to Tasmania or are you planning to go one day?

Tony-Yes, I've been to Tasmania and I've met up with Col, which was a great honour after all he's done for the subject of the thylacine. I'm planning another trip before the end of the year, once I get all my ducks in a row,

Q-Reviews of The Last Tiger on Amazon.UK are amazing, you must be proud of this sort of reader feedback.

Tony-Yes, of all my books I'd say The Last Tiger is the one that I held closest to my heart. The only other one that comes anywhere near is His Father's Son - also set in Australia - because it's dedicated to my son. The Last Tiger did get some great reviews and was runner-up in Not the Booker Prize (it won the popular vote by a mile, but that's another story!) so I can't complain about the critical response at all.

Q-Have any readers ever contacted you with thylacine claims?

Tony-Yes. Quite a few over the years. When I was working for The Standard, after my first story on SW thylacine sightings, I was inundated for a little while. I remember one old bloke coming in to the paper to tell me he saw a thylacine when it was brought to town by a travelling circus in the 1930s. He was still moved by that creature, spoke about how sad it looked in the cage the circus kept it in.

Q-Your writing skills are impressive enough to make some of your reviewers cry?
Tony-Hopefully for the right reasons! The agent I had when I wrote The Last Tiger was over in America, a really lovely woman, and she still tells me how moved she was by the book. She'll warn people who post on Facebook that they've just bought The Last Tiger to make sure they have a box of tissues to hand. I'd like to claim it's down to my writing but I think the story we all know of the demise of the thylacine is the real tear-jerker.

Q-Any more books on the tiger in the pipeline?
Tony-No, I'm afraid not. I'm not done with the thylacine, but it's a subject I think I've exhausted in The Last Tiger. The final chapter does, however, leave the door open for an addition to the story, a last hurrah for the thylacine if you like, I think we'd all like to see that chapter added to the story, one day.
Thanks for yout time Tony !
https://www.amazon.co.uk/d/cka/Last-Tiger-Tony-Black/1908885556
Email ThisBlogThis!Share to TwitterShare to FacebookShare to Pinterest
Newer Post Older Post Home